And, this book - "Uçlarda Gezintiler" - may be the first of its kind in the world.
To order this book: tourette.tik.tak.hip@gmail.com 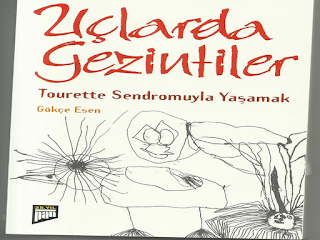 Excerpt from "Uçlarda Gezintiler":
"Welcome “Kağan”![1]
......  It was Sunday. I had not given birth yet although almost one week had passed since the estimated date. I woke up that night by noticing that it was wet from my waist down. I remembered what my mother experienced when she gave birth to me. “My water broke untimely when I was giving birth to you. My elder sister did not want to send me to hospital. (At that time, it was several years since my aunt’s husband had died in hospital and she had nearly lost her faith in doctors.) We called in a midwife home. I was able to give birth to you in full 8 hours. I was screaming with pain so much that passers-by in street were knocking the door and asking ‘what’s going on inside?’”.
My gynaecologist had given us his home phone number in case something urgent happens. Ĉan[2] called him at once and he referred us to the hospital where I was going to give birth. My water, too, broke untimely. The birth was expected to be normal. But, I would be given serum for artificial pain. The serum became a torture for me at that moment and sheer comedy later. The serum that was injected in the hip was causing so much pain that I was yelling out “Help! Doctors are torturing me!” at the top of my voice; my mother-in-law heard my yells from 3 floors below of the delivery room.
And Kağan was born in the afternoon. Ĉan had entered the delivery room with me. He was more exhausted than me when the delivery ended.
Kağan looked pretty good. Becoming a mother was a very pleasant feeling. The next day we came back home. I was able to breastfeed. Kağan was able to keep his head upright in a week. Our next-door neighbour who was a nurse was very surprised at this.
Kağan’s infancy
On his crib I hung a toy ring that he could hold when he extended his hand. He began to hold the ring almost at the same time as his eyes opened. He was a energetic, restless, fidgety baby. But, this was normal for me. Because I, too, have been energetic ever since I can remember, I have always wondered “Is he / she ill?” whenever I saw a calm baby. “This” was our normal because my mother and my close relatives referred to my infancy as “very energetic” and to my later childhood as “climbing flat walls”, “hasty”, “dropping herself downstairs” and my mother-in-law referred to Ĉan as “hyper”, “gets bored”. Besides, the paediatrician who we take Kağan regularly to was very pleased with his development.
Our next-door neighbour, my parents, my husband’s mother and his grandmother, Kağan’s aunt, all evaluated Kağan as being cheerful and energetic. Our next-door neighbour noticed that he was influenced by feelings of people when he was 4 to 5 months old. Because Kağan had sensed her sadness. I remember that Kağan cried sobbing for a long time when Ĉan raised his voice during a quarrel between us.
I used to play with Kağan as if a little girl plays with her doll and I used to sing songs to him for hours. Ĉan used to take Kağan in his arms for hours and used to amuse him bouncing him up and down. Songs, sounds and movement used to entertain the three of us a lot.
As a 6- or 7-month baby, Kağan used to imitate the sound of the wall clock in his grandmother’s apartment when it struck every hour and half hour:
-          Donnn, donnn, donnn, ...
Laughing with joy, he used to listen to the song “Turn left and right, alternately, Squire Timur![3]” which his grandfather used to sing to him in a funny way.
His reaction to the sound produced by a breaking glass container in the kitchen when he was at the age of nearly 1.5:
-          Ker ner ner ner nernnn
From watching us, he learned to use our small home computer, which displayed information on a TV set, and he used to do experiments with it producing various sounds when he was 1 – 1.5 years old.
Our life, which flowed in Istanbul, changed direction when Ĉan wanted to work in Denmark for a company. Denmark started a new phase for us, especially for Kağan, so that we can mention two phases, namely “pre-Denmark” and “post-Denmark” phases.
Kağan was restless both before and after we went abroad. But, he had good communication with his grandfathers, grandmothers, his aunt, his uncle and with our neighbours before. Though all these relatives of us were troubled and obsessed people, Kağan was growing as a social child in an environment of intense attention and affection despite all the confusion. Nevertheless, Ĉan persistently said that he surely would take the opportunity to go to the northern land which he always had wanted to see. It was the second year of our marriage and I didn’t want Ĉan to go alone. At that time, we used to behave stubbornly towards each other and my feelings of jealousy stood out. Ĉan used not to lag behind me in behaving stubbornly and he used to agitate me. We often used to quarrel before Oğuz. Ĉan wanted to go ahead and us to go one month later; as for me, I asserted “If it is necessary to go, let’s go together.” And, we all went together. We stayed in a hotel for a month until we found an apartment. Naturally, life was not so easy with a small child. Ĉan continually told me that I was stubborn. In the end, we calmed down for a while when we found the apartment. But, we hardly socialized with anyone except for our Turkish friends who we used to socialize with every 3-4 weeks. Our life was limited to almost three of us. And I was overwhelmed terribly.

Agust 23rd, 2012
Below are listed definitions related to Tourette Syndrome, that is one of excesses, and relevant comparative quotations from books. 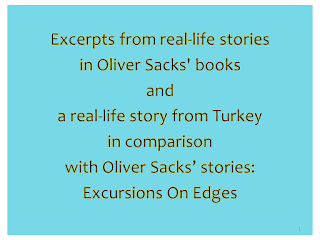 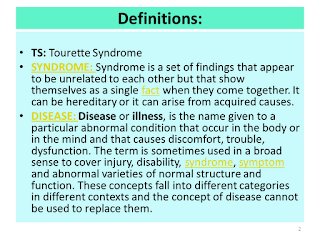 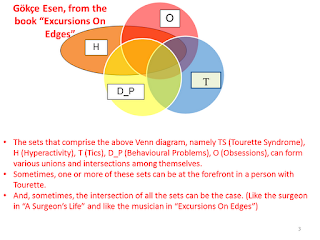 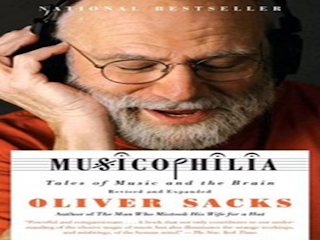 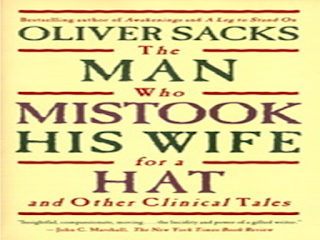 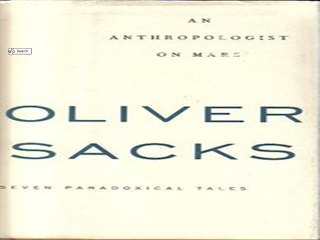 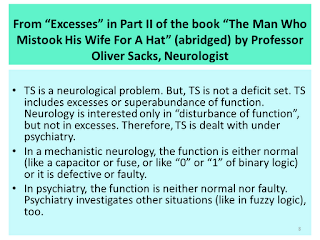 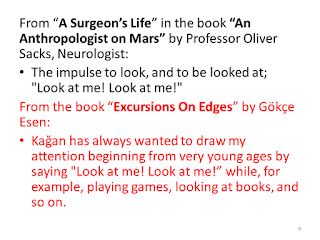 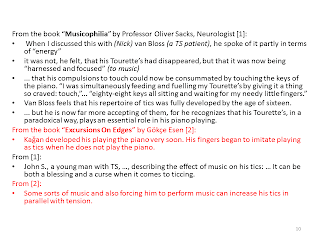 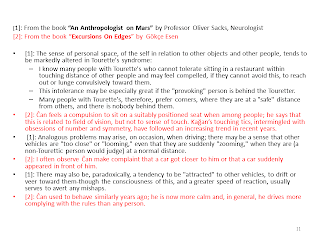 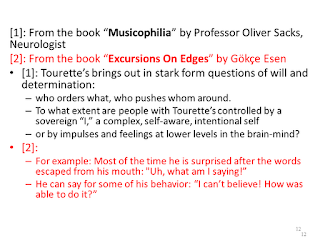 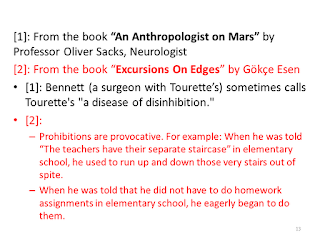 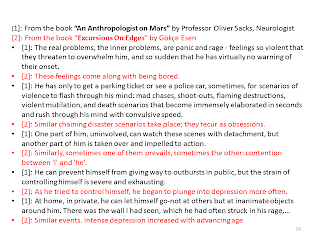 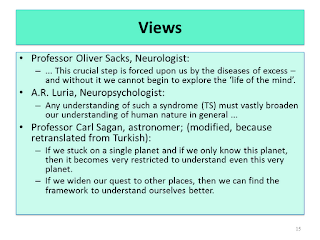 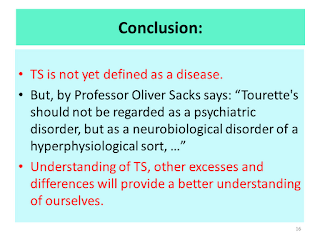 TOURETTE SYNDROME:To be able to understand differences_2: For democratic education system and life
Rigid systems, which are not (cannot be) organized according to differences, remain trapped in A BINARY LOGIC SYSTEM consisting of values of “those who (can) comply” and “those who don’t (cannot) comply”. It is attempted to eliminate those who don’t (cannot) comply.
The definitions of “normal” and “excessive” not only identify these two extremes but also define many fuzzy situations between them. Just as average individuals are different from one another, so individuals who are different from the average are different from one another. From time to time, individuals with “average" behaviour and those with "extreme" behaviour can exhibit characteristics close to each other and they may experience exchange of roles.
Tourette Syndrome (TS) can be given as an example of excesses. The most daunting issue for a person with TS is to try to teach him (her) something by force and to make him (her) do something by force. In fact, it is an issue that is daunting for any one of us. Flexible systems, which do not try to condition, can help every individual explore their capabilities. An individual with TS, who can never learn under pressure, can work miracles when he (she) wants to do it himself (herself). He (she) has a superior / extreme learning performance in subjects that he (she) focuses his (her) attention in.
Excesses can generally make individuals different in society from those who don’t have them. Extreme creativity of TS patients that comes with connotations can become very useful productions if it focuses on positive areas. Example: Samuel Johnson who is a poet, essayist, moralist, literary critic, biographer, editor and lexicographer.
Information is one of the most important needs for different individuals not to be excluded from society, for them to discover their talents, and for the happiness of each one of us. Here are some examples where some real-life stories about the excesses from within differences are discussed scientifically:
·         The neurological stories of a talented surgeon with Tourette’s, of an accountant with Tourette’s who played drums with his extraordinary improvisations on weekends, of a pianist with Tourette’s who was admitted to British Royal Music Academy are told in Oliver Sacks’ books as well as a number of other neurological stories.
·         The education and life adventures in Turkey of a talented musician who was diagnosed with Tourette’s, his experiences with his father who is probably also with Tourette’s and his mother who is probably hyperactive and obsessed, are analyzed on the basis of Oliver Sacks’ stories using his mother's expressions in the book “Excursions On Edges”.
In general, “trying to know and understand"[**] will make the democratic system, which embraces minorities and their rights, accord with its meaning, make it to function properly and make us to solve our problems.
[*]According to OLIVER SACKS, Tourette's Syndrome, can be seen in about one of a thousand people in every society, every race.
[**]Tınaz Titiz: The calmness that we need lies in trying to understand the integral unity of differences, but not in trying to establish unity by eliminating the differences.
Yours sincerely,
A.Şükran Demiralp

Translated into English by Mehmet Demirlalp